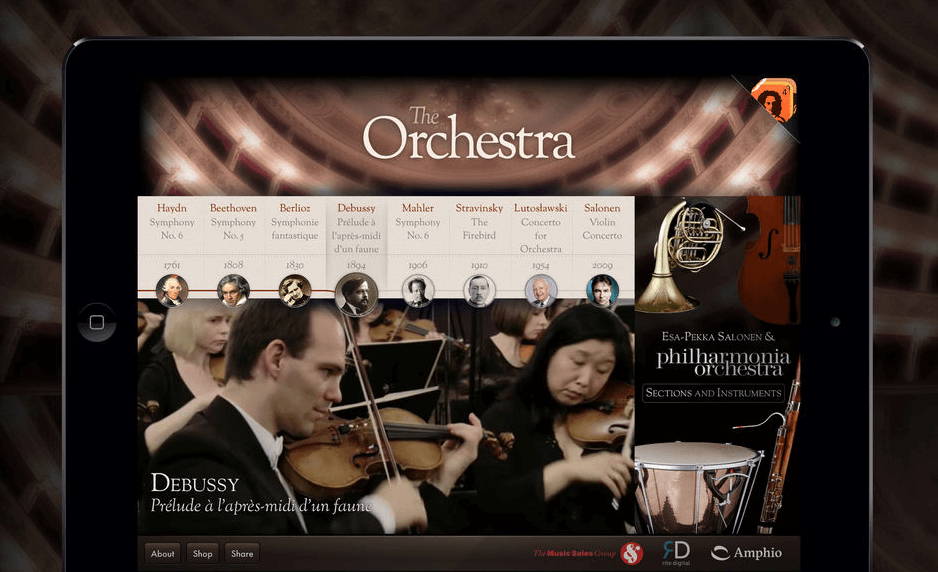 Developers Touchpress are quickly becoming one of the top creators of iPad apps. The Orchestra is just another fine example of how apps should be designed and built. Although the app centres around classical music, you don’t necessarily have to enjoy classical music in order to appreciate it.

The focus of the app is to help users understand and observe an orchestra while they are playing — with note-by-note visualisations of each piece as it’s played. There are multiple camera angles and views so that you can switch between them at any point during the music.

The excerpts of music span three centuries and include eight symphonies from some of the world’s greatest composers. These can be carefully observed from many perspectives, such as video and the fascinating, synchronised BeatMap. This super technology essentially displays what part of the orchestra is playing, by using a collection of colour-coded circles that light up when active.

An app called The Orchestra wouldn’t be complete without some information relating to the instruments. Luckily you can discover how a particular instrument works, but also read, watch and hear the musicians themselves explain their role in the orchestra.

A truly spectacular app, that is a must-have for music teachers everywhere.

Note: The Orchestra app is extremely large (almost 2GB) and will likely take a while to download and install.

Guitar Tuna is a free app for tuning musical instruments

Layer recordings of singing, beatboxing or instruments in Loopy HD